What Popper did and didn't say about the paradox of intolerance 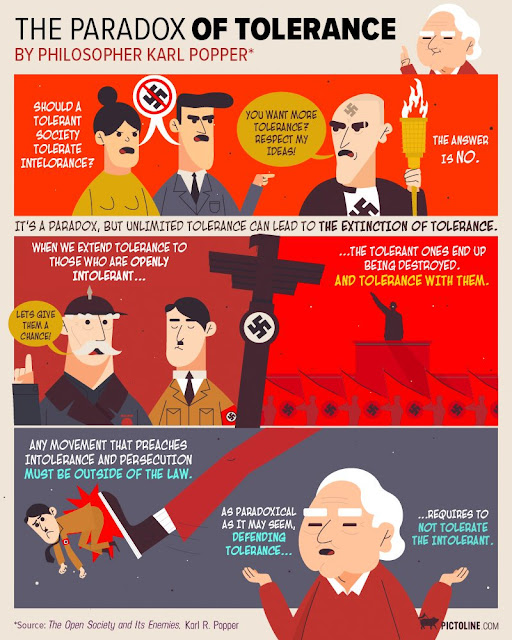 I’m pleased to see Karl Popper back in fashion. Because he was an important critic of Marxist thought, he has generally lumped in with Conservative thinkers by the left and so ignored by the people who should read him.

But there is a danger that those who like the sound of Popper from the image above, but have read no more of him, will misunderstand him.

And I don’t just mean that they will take him for a twinkly-eyed professor like Shorofsky in Fame. In reality, Popper was, by all accounts, not an easy man to deal with. His students were given to renaming his best known book The Open Society and its Enemies as The Open Society by one of its Enemies.

No the danger is that the image dos not tell you the insight that the free criticism of ideas is vital for both the conduct of science and the maintenance of political liberty is at the heart of Popper’s philosophy. He makes an unlikely champion of censorship.

Popper’s formulation of the paradox of tolerance is found in chapter seven of The Open Society and Its Enemies, which deals with Plato’s treatment of political leadership in The Republic.

The paradox of freedom shows the dangers of defining democracy as the implementation of the will in the people. For the people may choose to give power to a tyrant and, as Popper comments, this is not just a theoretical possibility: “it has happened a number of times.”

Plato sees this paradox as undermining the case for democracy. Popper prefers to defend it by offering a more pragmatic definition of it. He suggests that a democratic government is one that can be got rid of via institutional means rather than bloodshed.

The second paradox Popper identifies is the paradox of sovereignty. This turns out to be the other side of the coin of Douglas Adams’ observation that:

It is a well-known fact that those people who must want to rule people are, ipso facto, those least suited to do it.

For Popper writes that all theories of sovereignty are paradoxical:

For instance, we may have selected ‘the wisest’ or ‘the best’ as a ruler. But ‘the wisest’ in his wisdom may find that not he but ‘the best ‘ should rule, and the best in his goodness may perhaps decide that ‘the majority’ should rule.

which brings us back to the paradox of freedom.

Or as Douglas Adams might have put it: “the people most suited to rule will, ipso facto, not wish to do so.”

The paradox of tolerance is discussed in a footnote on this discussion of paradoxes. There Popper writes:

In this formulation, I do not imply, for instance, that we should always suppress the utterance of intolerant philosophies; as long as we can counter them by rational argument and keep them in check by public opinion, suppression would certainly be unwise. But we should claim the right to suppress them if necessary even by force; for it may easily turn out that they are not prepared to meet us on the level of rational argument, but begin by denouncing all argument; they may forbid their followers to listen to rational argument, because it is deceptive, and teach them to answer arguments by the use of their fists or pistols.

We should therefore claim, in the name of tolerance, the right not to tolerate the intolerant.

So what do we make of all this?

Putting Popper’s brand on the paradox of tolerance risks going too far. He was not the first to identify it and, though he admits its validity, it is not central to his argument in The Open Society and Its Enemies.

Popper is concerned that the opponents of tolerance may resort to violence, not that they may express intolerant views.

Popper’s first instinct when faced with such people is to “counter them by rational argument and keep them in check by public opinion”.

Where he does support the suppression of the intolerant is in the face of threats of violence and threats to overthrow of the state or system of government. Following Popper’s formulation, it would, for instance, have been fully justifiable to act against those planning the attack on the Capitol in Washington in January 2021.

You may think Popper took the danger posed by such people too lightly, but you will have to argue for that position from your own resources, because Popper would not have supported you.