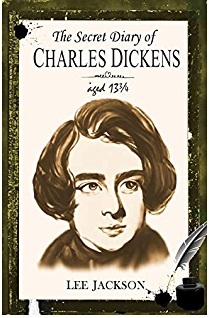 An exclusive extract from The Secret Diary of Charles Dickens aged 13¾ by Lee Jackson.

Living in Johnson Street, Camden Town, young Charles yearns to make his way in the world. But he is constantly thwarted by his less-than-respectable family, particularly his endearing but spendthrift father...

Saturday 7th January
Mama going on and on about old Mrs Hathersage across the road, like some squawking parrot in petticoats. ‘Someone ought to go and befriend the poor old dear and perhaps her pretty little niece would also like the company …’ &c &c. Mama is possessed of a romantic humour and suspects that the old lady is a member of the aristocracy fallen upon hard times. I remarked that, in any case, I doubted that the niece was pretty or little – none of us have actually seen her – most likely she had great bulging eyes and a fat hairy chin.

‘Putting eyes and chins to one side –’ said Fanny –

‘I hope no-one is to be mutilated on my account,’ I interjected (v. droll!) –

‘I am,’ continued Fanny, regardless, ‘far too busy practising for my examination.’

Mama merely tutted and looked back at me.

I hurriedly replied – I confess, I do not quite know why – that I was also too busy because I was writing a play.

Fanny laughed out loud, but Mama, after a moment’s reflection, was rather taken with the idea and very encouraging. She remarked that my Uncle John knows shorthand and her second cousin was a sign-writer, so perhaps literature runs in the family.

9 o’clock p.m.
I shall write a play. It cannot be that difficult.

A quarter to 10 o’clock.
Mrs Fitzharris has appeared at our door ‘for a chin-wag’ (at this hour – it is hardly proper!). Papa is out but Mrs Fitzharris and Mama are now sitting in the drawing-room, all very snug and comfortable, drinking gin from our best little glasses. This will not end well. Mrs Fitzharris has a rather inflamed and flushed appearance at the best of times, and – if I am not very much mistaken – was quite merry before she crossed the threshold. She is now giggling uncontrollably and, by the sounds of it, bumping into our furniture. It is most unseemly in a female of her years and making it very difficult to start my play at all, which I am now thinking of entitling The Washer Women; or A Pickle in the Parlour.

Went downstairs. Mrs Fitzharris still talking very loudly to Mama about MEN who are CHEATS and KNAVES and LIARS, and listing ALL THE MEN SHE WOULD HAPPILY SEE HANGED.

I think that she has been disappointed in love.

Quarter past 11 o’clock p.m.
Went back downstairs again, out of pure curiosity. Mrs Fitzharris slurring her words together – Mama, I will swear, was only pretending to understand her – and positively rolling around the room, like a skittle on the deck of a steamboat. It was a proper sight! Mama, however, looking rather fearful and timid.

Midnight
Awful scenes. Papa has come home quite as merry as Mrs Fitzharris. They are now finishing the gin together. Mama has retreated to her bed.

I went into the drawing-room and complained about the noise. I said that I expected that Shakespeare and Sheridan got a decent night’s sleep when they were starting out in life. Papa did not understand and made me tell them the joke about the empty vessel and the foolish Dutchman. Then neither of them laughed.

Two o’clock in the morning (!)
Mrs Fitzharris has finally stumbled off home. Papa is lying all crumpled and angular on the stairs, like a broken accordion.

I think that I shall call my play The Neglectful Parents; or The Wages of Sin is Death.

The Secret Diary of Charles Dickens aged 13¾ is available on Kindle in the UK and the US.

You can find Lee Jackson online at The Dictionary of Victorian London.